Wrap up 2015: Five ridiculous things that went viral in Singapore

Of Amos Yee, his banana, and other things that shook our nation's internet.

This year, like any other year since the rise of social media, has been filled with many incidents that captured unnecessary attention. Here are five ridiculous things that went viral in Singapore:

When a Caucasian man hurled insults at a boy who wore a t-shirt printed with a vulgarity, a man stood up against the bully, an act saluted by many. Muhammad Hanafie, who was hailed the “MRT Abang” (abang means brother in Malay), said he only intended to stop the bullying. The act was recorded on video and posted on Facebook.

The video quickly went viral and with over 20,000 shares, the attention soon blew out of proportion.

Netizens’ comments escalated, with some even going as far as turning the matter into a racial issue. It sparked controversies about foreigners in Singapore, when all Hanafie wanted to do was stop a fight, regardless of who was involved.

Following the video, Hanafie was scouted by Manhunt Singapore, a male pageant. He was even offered to act in a drama on Suria. Although he deserved the recognition, this may be a bit much.

2. Sewing on the MRT

The MRT sure is a place that is ideal for drama. Last month, a commuter wrote to The Straits Times forum about a woman working on her cross stitch on the train, which she deemed “unsafe”.

All hail the power of social media, the post went viral when netizens mocked her feedback with sarcastic comments and poked fun at the issue. 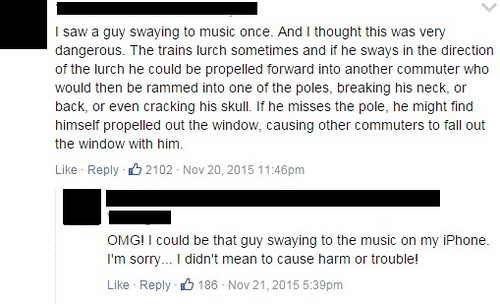 The news even made it to BBC Asia, highlighting the amusement Singaporeans felt by the open letter.

3. Married for six weeks and divorced

Cheating partners are not acceptable, but airing your dirty laundry in public may not be a smart choice either. In case you missed it, a woman took her marital problems to social media when she caught her husband cheating. It sparked criticism from other netizens and even made it to a Malaysian social entertainment website.

NOW THAT IS A REAL DRAMA!

As if the video was not enough, the couple engaged in a virtual war on Instagram, each condemning the other’s actions.

How much do eight one-dollar coins weigh? The PSLE question prompted criticism from unhappy parents who said the question was more of an IQ question than a Mathematics examination.

The uproar against the question was unbelievable. But, did you know that the ability to estimate is a real requirement in the syllabus?

Amos Yee, the 17-year-old blogger who gained overnight fame for his offensive video about the late Lee Kuan Yew, surely received the attention he wanted. Social media users went crazy over pictures of him eating a banana on the way to court.

Netizens mostly commented on the indifference Amos displayed and his lack of remorse, but the attention given to him was overwhelming.

This is the third of a four-part series on the biggest headlines in 2015.

5 childhood toys and collectables worth a small fortune now