LTA may be experiencing a breakdown in its latest campaign.

There is no doubt that Land Transport Authority (LTA) is trying hard to push for a car-lite Singapore. A little too hard in fact.

Since April, LTA’s ‘Walk Cycle Ride SG’ campaignhas been actively encouraging citizens to consider walking, cycling, and riding public transport through a series of banners. Mostly spotted in bus stops and MRT stations, these banners have turned heads due to its peculiar captions.

Here are some of our favourite captions. 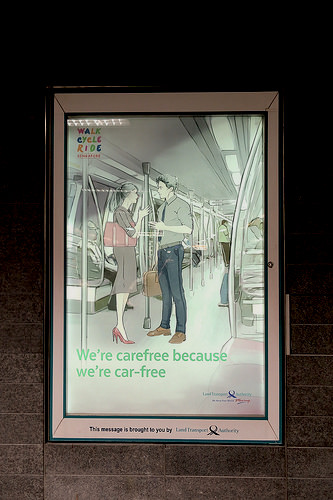 Indeed, because you can save thousands of dollars from getting a Certificate of Entitlement (COE), isn’t it?

But hold up. Let’s take a moment to pay tribute to this cringe-worthy word play.

In fact, much mockery was directed at the pun. Singaporeans had expressed concern for PAP Member of Parliament (MP) Koh Poh Koon, who might have been distressed over the fact that he owns two cars.

Having brought forth a normalised notion that “every Singaporean has a car”, such effort sure helps Singaporeans elevate their stress levels.

Moreover, is there really a need for me to remind you that having a car is one of our classic five Cs?

2. Someone else is driving, I can daydream How idealistic! Can one really daydream with a cheerful face while being stuck in a carriage reeking of sweat during peak hours?

Should you even manage to get a seat and have plugged-in earphones like the lady shown, you may be STOMP-ed due to apathy. You know it happens.

This particular caption has also been criticised by notable local poet and playwright Alfian Sa’at. He noted the discrepancy between the intended aim and the perceived message of the text.

LTA why you Fail. So. Hard. Intended meaning: 'Because someone else is driving, it frees me up to do other things'….

3. Freedom to come and go The text is accompanied with an image of a female cyclist who seems to be enjoying her freedom to be active. No wonder people mistook this as a sanitary pad ad at first.

Jokes aside, there is a reason why this campaign has turned into a laughing stock. Not only does the campaign depict a far-fetched notion on public transport, it shows how out of touch the government is from on-the-ground problems.

It seems that LTA is attempting to portray an idealised image of public transport and grasping at straws to materialise a car-lite Singapore, instead of acknowledging the not-so-pretty reality.

Does our current public transport system really let us daydream or render carefreeness in us? Perhaps LTA should have reviewed its campaigning techniques with fellow Singaporean commutes before launching this nation-wide initiative.

Series review: ‘Going To You at a Speed of 493km!’ isn’t as impressive as it sounds