She acts, she sings and she dances. A career in theatre arts may seem airy-fairy, but it is more than that.

It was halfway through the performance when she realised her co-actor was missing. She shouted for her ‘boyfriend’ and spun around, expecting him to be behind her, just like they had rehearsed. But he was not there. Panic showed in her eyes while she quickly improvised to save the scene.

Such spontaneity and quick-thinking are essential to every actor, even more so for a theatre actor, who cannot afford re-takes during a live show.

Two weeks ago, Youth.SG visited Celine at the Singapore Repertory Theatre to learn more about being a theatre actor.

We learnt more about her experience as a theatre actress:

Tell us about yourself.

I am a simple person who likes to be surprised. The littlest things make me happy. I like to read. This may come as a surprise but I love to play video games, board games and online games. I am inquisitive and I ask ‘why?’ a lot and in my free time, I surf Wikipedia. My favourite television channels are the Discovery Channel, National Geographic, Animal Planet, and Discovery and Living.

Tell us more about what a theatre actor does.

Generally, theatre actors in Singapore do more than stage work. We also do ‘outside work’ such as drama, school assembly shows, voice-overs for animation, radio, filming and hosting.

People tend to think that theatre is a very ‘airy fairy’ industry but it is more than that.

How and why did you come into theatre?

I have always been interested in theatre. My mother exposed me to the arts since young. I love to sing and I kept singing all the time. I was in accounting but I would always find time to perform with my church group.

When the company I worked for closed down, my friend, who was working on Forbidden City, told me that there were open auditions. I auditioned, got in, things went on and I never looked back.

Describe a typical day at work.

It depends on how we manage our schedules. In good times, I can have as long a break I want, but when it is ‘bad’, it could go like this: wake up at 6am for a 7am school assembly show, finish the show by 8.15am, cab to SRT for a 9am rehearsal which lasts till 5pm, then head down to the Drama Centre for a 6pm call for a show from 8pm to 11pm. Weekends are the worst periods for theatre actors.

True enough, we caught Celine for this interview in between her shows. She had to rush off immediately for her next show – Three Little Pigs. 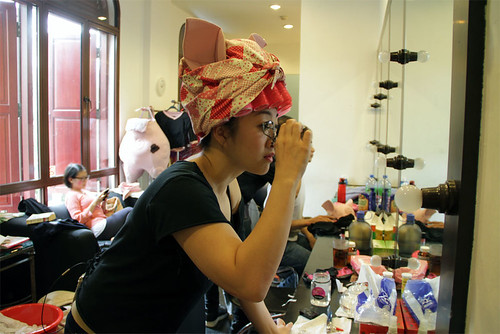 How long do you rehearse for a production before the performance?

Typically, rehearsals for a play take about three to four weeks, five to six weeks for a big musical, and children’s shows take between three and six weeks, all with six day work weeks.

Share with us a memorable experience you had and why you found it memorable.

There are so many! Every production has its quirks and memories.

In Forbidden City, there was a scene where everyone was supposed to ‘die’, before two cast members came out to sing. It was a rather long scene and one day, one of my co-actors fell asleep while pretending to be dead on stage. He even started snoring loudly. The rest of us tried so hard not to laugh. Hossan Leong, one of the actors who came out to sing, had to kick the sleeping guy while walking past.

Is there anything you do not like about your job?

I dislike rehearsals on Sundays because I want to go to church and rest!

I also do not like it that we do not have a union here, so there is no minimum wage rate and no actors’ rights. This can be unfair, especially for those who have been in the industry for a longer time and who do this for a living.

How long have you been in this industry and how has it changed over the years?

I have been in theatre for almost nine years and have done more shows than I can count – perhaps more than 50 local ones and a few overseas shows.

It has become more commercialised. Local writers are up and coming. Companies are exploring new works and staging larger shows. The pay has gotten much better. There are also new production companies trying to pay artists better.

What were some of the toughest challenges you faced?

I find physical theatre (a mode of performance that pursues storytelling or drama through primarily physical and mental means) tough. It is not my forte so I try not to go into it.

Besides that, it would be accents. I am pretty good at mimicking them but it may not sound convincing. You have to understand the culture behind an accent to bring it across convincingly, and that is not easy.

What is the most fulfilling thing about your job?

The element of wonder in the audience’s eyes. The ability to take them away from their ordinary life to another place for a few hours. And for them to vastly appreciate our work.

What advice do you have for youths considering a career as a theatre actor?

Do not come into theatre if you are expecting fame. Theatre work is sometimes not acknowledged and you have to work very hard. Do not expect to be big and famous within three or five years. Be clear about what you want. Truthfully, theatre is not where you get exorbitant pay – you get that from doing corporate gigs, hosting and voice-overs.

Be punctual. Be humble and eager to learn because you may be good, but there are always others better than you. Never give advice to fellow actors as that is the director’s job.

Being a theatre actor:

What is the Singaporean Dream and how can we achieve it?

What it is like to intern at Google Singapore