At 23 years old, he is already an experienced hawker. Terence Chee shows us what it is like to be in this unique career. 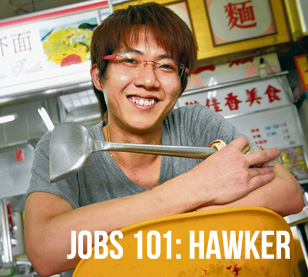 In the corner of a hawker centre at Serangoon North Avenue 1 stands a stall named, “Xiao Di (Little brother) Fried Prawn Noodle”. The stall’s owner is 23-year-old Terence Chee, who looked like an unlikely hawker – until he began cooking.

Tell us more about yourself.

I started selling fried prawn noodles at my stall in March 2012. I play basketball on days when I end work earlier. Besides that, I go food hunting, KTV and watch movies.

How and why did you become a hawker?

The older generation – the hawkers I used to work with – was very generous towards me, passing their skills and trade secrets to me, hoping that I’ll make a mark for myself in this line someday.

My first choice was western food, but there was already a western food stall at the location. So, prawn noodles, which I have been doing for the bulk of the last six years, became the natural second choice.

Describe a typical day at work.

My day starts at about 7.30am when I leave for the market to collect my ingredients. I will be at the stall by 8am to process the ingredients and boil the stock. I prepare the food daily, such as fry the lard, cut the pork belly and shell the prawns.

The preparation will usually be done by about 10.40am, so I will have a little time to eat before 11am, when I start business. I usually close the stall at about 8pm, or a little earlier if the ingredients run out.

My mum helps out full-time at the stall. My relatives (mainly my uncle) and friends help out part-time when I need extra hands.

How long have you been in the business, and how has this industry changed through the years?

I’ve been in this business for about eight years since my days as a cashier and apprentice. The industry has changed a lot with the entry of big players and their chain operations.

Even though food standards are not as good, the bigger players are able to work with cheaper labour and higher efficiency. The sad part of this is that most of the smaller players in the market choose to cut corners to match the pricing competition instead of uphold food standards.

What are some challenges you face on the job?

The challenge lies in striking a balance between the rising cost and the profit margin. There is also a need to understand raw ingredients well, as there are a lot of factors that can affect their quality.

It’s so often that I overhear people discussing if they should eat at my stall since it’s a kid cooking, but that’s not really a problem. Usually, I would just walk pass them with the food for them to see and smell.

What motivates you in your work?

Any advice for youths considering a job as a hawker?

Be prepared for hardship; nothing good comes easy. Your first mentor will play a decisive role in your future. Find one who is serious and dedicated to his craft, and you will learn more than just food.

What is the Singaporean Dream and how can we achieve it?

What it is like to intern at Google Singapore