Apart from the SingapoRediscovers vouchers, the government will continue to support and create jobs.

The government will set aside $320 million to boost and support the local tourism, as well as continue to support workers by creating new jobs.

The announcements were made by Deputy Prime Minister and Minister of Finance Heng Swee Keat in his ministerial statement on Monday (Aug 17).

Other measures, such as the seven-month extension of the Jobs Support Scheme (JSS) and the new Jobs Growth Initiative (JGI) to bolster hiring, were announced too. The latest measures will not draw on past reserves, Minister Heng added.

The SingapoRediscovers vouchers are aimed at giving the local tourism sector a boost.

Minister Heng noted that due to travel restrictions, the number of foreign visitors has dropped drastically and this has a huge impact on our tourism sector. At the same time, many Singaporeans who love to travel are unable to do so.

“Local consumption will not fully make up for tourist spending, but I hope Singaporeans will take the opportunity to explore our local culture and heritage, nature, art, and architecture,” he said, adding that more details on the vouchers will be released next month.

“You may be surprised by what you discover.” 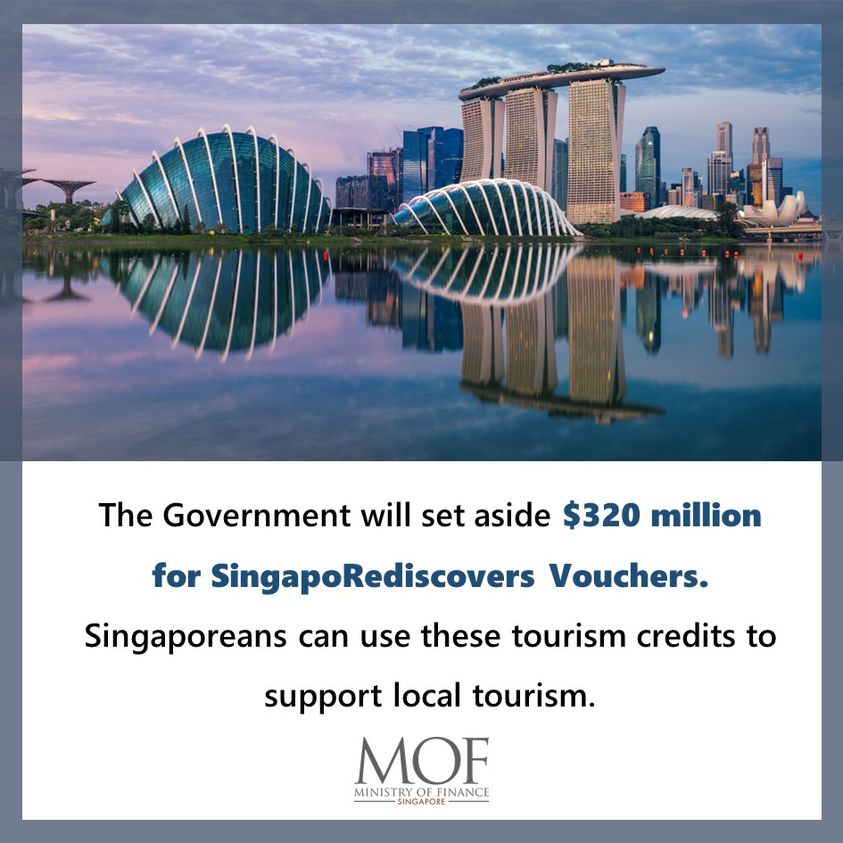 The new JGI will support the government’s efforts to create new jobs for workers in areas such as biomedical sciences, financial services, information and communications technology, public healthcare and long-term care sectors.

The programme will be worth $1 billion. Under JGI, the government will co-pay up to 25 per cent of salaries for all new hires in the areas covered for one year, subjected to a cap. For workers 40 years or older, it will be up to 50 per cent.

More information will be announced by the Ministry of Manpower later this month.

The JSS, introduced in the first budget in February, will be extended until March 2021.

The scheme, which sees the government co-fund between 25 per cent and 75 per cent of the first $4,600 gross monthly wages paid to each Singaporean or permanent resident employee, had been due to end this month.

Minister Heng said that the extension will come with adjustments, as it cannot be sustained at current levels.

Moving forward, companies in the aviation, aerospace and tourism sectors will receive wage subsidies of 50 per cent for the full duration.

Firms that are coping well are encouraged to return or donate their JSS payouts. Minister Heng noted that almost 600 firms have done so. Introduced in May to support Singaporeans and permanent residents who are unemployed or have suffered significant income loss, the CSG has so far helped over 60,000 people with more than $90 million disbursed.

Minister Heng added that the extension will be open to existing CSG recipients and new applicants from Oct 1. To qualify, unemployed applicants must show that they have made efforts in their job search or training.

Adults should get 2.5 to 5 hours a week of moderate exercise: new Health Promotion Board guidelines