Failure did not stop her from completing her Youth Expedition Project

When the equipment for their overseas service-learning project didn't arrive on time, Gayathri's team gave out of their own pockets to complete their mission.

They were supposed to be installing solar panels in a community hall in Nias, an electricity-deprived island in Indonesia.

However, a week into the volunteer trip last June, Gayathri Narkunan and her team realised that the equipment for their project faced problems clearing customs and would not arrive on time.

“We had two weeks there and we rescheduled everything, hoping that the solar panels would come. We did whatever we could: repaired the ceiling, cleaned the toilets of a local school, lay the foundation…but the solar panels didn’t come,” the 24-year-old Nanyang Technological University (NTU) undergraduate said. 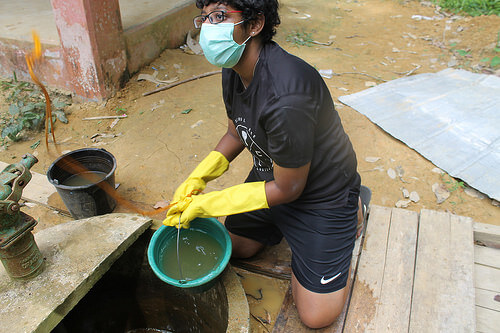 While Gayathri was no stranger to volunteer trips, this was her first time leading an Overseas Community Involvement Project (OCIP). And as this trip was the first of its kind ever organised by NTU’s Electrical and Electronic Engineering (EEE) faculty since its opening in 1981, the pressure placed on the young leader was immense.

“I was afraid that I was going to disappoint my team,” said Gayathri.

Before this project, the Nias locals had been requesting for help for several years. As the island is often hit by natural disasters, they face frequent blackouts after major rainfall.

After raising support from fundraising events and sponsors like the National Youth Council’s Youth Corps Singapore, the group of 16 undergraduate volunteers set out to restore electricity to the community hall that locals relied on for their daily activities and learning needs.

Unfortunately, the team was forced to return home after two weeks, without accomplishing their mission, as their equipment was still stuck at the Indonesian customs.

“We felt very horrible,” Gayathri said, “but the amount of trust the locals had in us and the friendships made kept us motivated.

“One of the locals told me: ‘Don’t worry, if it’s something for good, it will happen.'”

Gayathri said with a wide smile on her face: “I felt very good, as a leader, when a good eight people were willing to go back a second time, and willing to use their own pocket money.

“The amount of happiness and the smiles on their faces made it meaningful. It reflects the impact of our work and how much it was appreciated by them.”

Despite the many obstacles and challenges, Gayathri found the project extremely rewarding.

The bubbly undergraduate said: “Don’t give up. No matter what, there is always a way through, so you just have to keep going. Eventually, there will be a solution and it will come to you.

“A lot of people tell me that after the trip, something changed in me and personally, I think it’s the fighting spirit.”

How can Singapore strive to become more inclusive as a nation

Singaporeans to receive up to $700 in Government payouts by December

Five things to do this weekend (Dec 2-4)