Don’t blame me if I don’t scream

Victims of molest should NEVER be blamed, whether or not they react.

A recent campaign launched by The Singapore Police Force and National Crime Prevention Council advises women to scream when they are molested. An article in The Straits Times started off with one simple sentence: Scream or tell someone you are molested on a train. 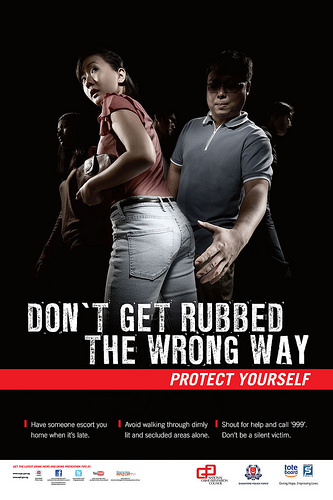 Cases of outrage of modesty on public transport increased last year, and this campaign serves to encourage girls, who have been molested, to act against their perpetrators.

Seeing these posters reminded me of October last year, when I was molested on the MRT. It was during peak hour and everyone was rushing to get back home. Naturally, the train was crazy packed.

When the train stopped at Novena, I felt someone pinch my butt. Because of the crowd, I did not get a good look at the person who did it as he was getting off the train. Countless questions flashed through my mind in that split second. “Did that really just happen? What if I scream and no one helps me? How can I prove he touched me? It’s his words against mine.”

By then, the molester had already alighted from the train.

I cannot even begin to describe that feeling of despair and disgust after getting over the initial shock and confusion.

What did not help were the comments I received after I posted about the horrid incident on Facebook. Alongside the sympathetic replies I got, some people took the chance to try and be funny by making jokes. Molest is in no way funny at all.

But the comments that hit way below the belt were the “advice” people gave on how I should have handled the situation. Friends told me I should have punched the guy. Another friend told me that I should have grabbed him and screamed so that he could be thrown in jail for molestation.

Which brings me to my point. It is not the victim’s fault even if she does not scream. Belittling the victim for not reacting immediately is like the rape culture, putting blame on the victim’s lack of reaction rather than the molester’s actions.

“If she did not want the guy to get away, she should have done this.”

No. Whether or not the girl reacts, it is still molest. Placing blame on the victim is completely unfair because the shock from getting molested gets in the way of logical thinking for many women, let alone young girls.

I understand that the campaign’s main objective is to encourage girls who have experienced such incidents to stand up against their perpetrators. But by then, the damage has been done. The girl has been molested and will likely remember it for life. So, why not implement more preventive measures?

Some countries, like Indonesia and Japan, have women-only cabins on trains, to prevent cases of molest. We could have the same. Public education is key as well. While it is important to teach people how to react in such situations, it is crucial to educate people that molest and sexual harassment should not even be happening at all. After all, prevention is always better than cure.

I urge you not to lose sight of who is really at fault in the situation, if girls do not react.

There is that initial element of shock when one is molested, followed by the immense fear of making a fuss over something that is hard to prove. Ultimately, if the girl reacts, make sure you help her.

Series review: ‘Going To You at a Speed of 493km!’ isn’t as impressive as it sounds