Both companies teamed up to create an interactive video series as part of efforts to engage youths.

How many times have you wished for a character to make a different choice instead while watching a film?

If you want that ability to dictate the choices your characters make, then head on over to watch FilterSpell – an interactive film series done by The Smart Local (TSL) and Night Owl Cinematics (NOC).

Featuring an all-local cast from both companies, FilterSpell sees the characters searching for answers to a mystery behind the use of Instagram filters.

However, viewers are handed the initiative for the story’s development – they can make choices for the characters at various moments, with each choice resulting in a different consequence.

While the video is about three minutes long, it adds up to nearly an hour if viewers want to go through every option.

It is the first time both companies are collaborating with each other. The film (also called What Type of Singaporean Are You on NOC’s YouTube channel), is part of the National Youth Council (NYC) and Ministry of Culture, Community and Youth’s (MCCY) efforts to engage youths under the SG Youth Action Plan.

The video has been viewed over 1.5 million times across all platforms since it was uploaded last week.

Sylvia Chan, NOC’s CEO and a member of the SG Youth Action Plan panel, said that the interactive videos are aimed at getting youths to understand, with a comedic spin, that the choices they make have consequences.

“What you choose when facing certain situations in this series may be guided by the values you hold and reveal the type of Singaporean you are,” she explained.

Bryan Choo, TSL’s managing director who also sits on the SG Youth Action Plan panel, added: “We wanted to encourage young Singaporeans to participate in charting their Youth vision. We thought the best way to do this was with a light-hearted, interactive video series that highlights the values they deem important.” 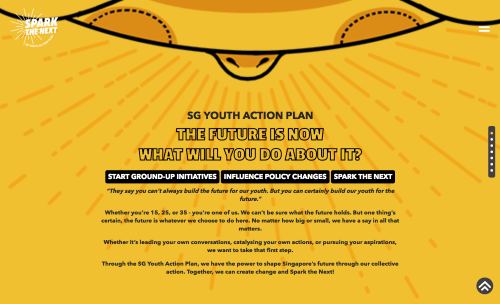 Along with the video, the YouthActionPlan.sg site has been launched too. If you want to engage on issues you care about or even take action on certain issues, you can do so on the portal. Over the next few months, the portal will focus on opportunities for youths to step up in Singapore’s fight against COVID-19.

KFC fries runs out in Singapore and replaces it with wedges, rival chain Popeyes pokes fun at it

YouGov survey reveals interesting trends about dating in Singapore, including how long to wait before having sex