Voices – A Festival of Song: How To Care for Your Voice

Join Jingyun and Joel as they cover key ideas on caring for your voice and maximising its effectiveness and potential in singing and speaking. Learn about vocal warmups, explore building blocks of good vocal techniques, and discover how to apply key vocal tips to caring for your voice. 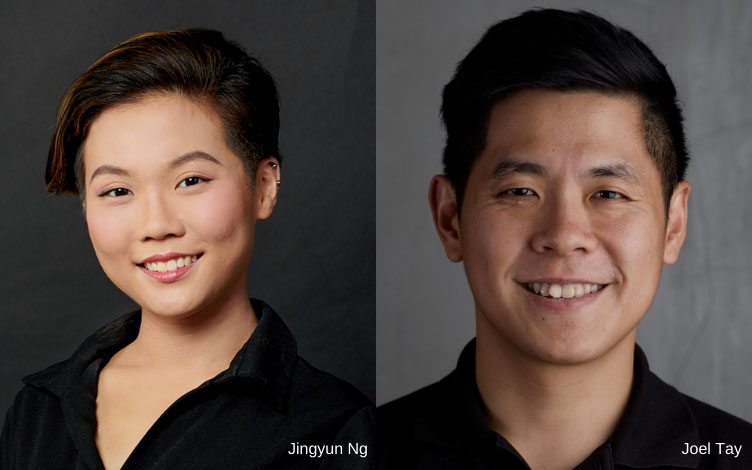 Jingyun Ng is a performer, voice teacher and the founder of Know Your Voice, a mind-body exploration and vocal health workshop series. She delights in finding meaningful connections within ourselves and between people through performance, coaching and facilitating discussions about wellness of being.

Bringing her bold spirit to stage, experimental and commercial projects, Ng is acquainted with western classical new music, vocal improvisation and voiceover engagements. She frequently performs with collaborators including L’arietta, The Opera People, Theemptybluesky and The Madhatter Project. She graduated with Honours (Highest Distinction) in Vocal Performance from Yong Siew Toh Conservatory of Music (NUS), and is an alumna of School of the Arts, Singapore. Her principal voice teachers include Akiko Otao, Alan Bennett and Thomas Manhart.

As a voice coach, Ng guides individuals to discover their vocal and artistic potential through equipping them with experiential knowledge of their psychophysical selves. She nurtures readiness for life-long voice work in singing with stylistic sensibility and versatility, and in speaking with a dynamic and supple voice. She currently teaches in her private studio, while completing her Graduate Certificate of Counselling with Swinburne University of Technology. She plans to continue her Alexander Technique teacher training in 2022.

Joel Tay is an experienced Speech and Voice Therapist who has worked with people with communication and swallowing difficulties for the last 13 years. Tay currently teaches in the Masters in Speech-Language Pathology programme at the National University of Singapore. He graduated from NUS with a degree in psychology and a Masters in Speech-Language Pathology. His primary clinical focus is in the treatment and prevention of voice problems. In addition to that, he also has vast experience working with people with language and speech difficulties and swallowing problems.

Over the years, he has had the opportunity to speak and educate the public about voice science and persuasive communication. He has spoken at World Voice Day Singapore, Esplanade’s Voices – A Festival of Song, and worked with many schools and companies such as Ogilvy and Hilton Hotels.

Tay hopes to bridge the gap between voice science and art, and hopes to demystify the often confusing world of voice training. In recent years, he has seen an increasing number of singers and helping them understand and protect their voice. He is also passionate about helping teachers regain their voices, and to teach them how to use good vocal technique to better command a class.

On top of helping people achieve the best of their voices, Tay also records voiceovers for a number of studios and companies in Singapore. He has also emceed for performances at the Singapore Grand Prix, the Watoto Children’s Choir, the Victoria Concert Hall and at Esplanade.

Singapore named most Instagrammable place in the world by travel website

African TikToker who speaks Mandarin is a Singaporean at heart