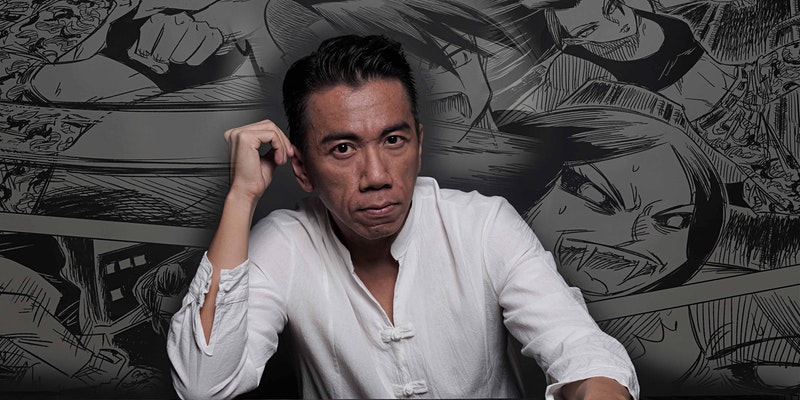 In conjunction with the Night at the Library spooky theme, the National Library will present a one-month exhibition on the horror comic art form through the work of internationally acclaimed local-born graphic novelist, Sean Lam.

Since his professional debut in 2009 In Japan, US, and Europe, Sean Lam has fascinated readers with engaging storytelling and characters that explore the hopes, dreams, and underlying fears of humanity. With hit titles spanning the genres of science fiction such as his two-part graphic novel adaption of New York Times bestselling sci-fi novel ‘Ringworld’, award-winning biblical biographies to children’s books, his drawing style is famous for innovative compositional techniques and versatile presentations that appeal to an international audience.

An alumnus from the Nanyang Academy of Fine Arts, Sean amplifies excellence and passion in his personal devotion to his craft, and the integrity of his ideals to reflect an uncompromising view of human nature. He skilfully weaves social context and detailed cultural settings into his stories to help illustrate how overarching social and paranormal forces influence the actions of his characters.

This exhibition will introduce Sean’s ideas from inception through development of his latest publication GEUNGSI which showcases an intense adventure in the heartland of Singapore, with specially selected prints and original drawings, as well as storyboards on display. GEUNGSI highlights the breadth of the artist’s cinematic style of storytelling.

Sean Lam is a Singaporean author and graphic novelist. He is best known for his two-part graphic novel adaption of New York Times bestselling Larry Niven’s sci-fi novel ‘Ringworld’ and a 32-page ‘Pope Benedict’ manga comic where 300,000 copies were distributed for World Youth Day 2011 in Madrid. He was also the International Award-winning artist of the bible themed graphic novel, ‘Judith: Captive to Conqueror’ at Angoulême Christian Comics Festival in France. Upon settling back to Singapore at the end of 2019, Sean eventually sets his heart towards writing and producing graphic novels most familiar to his roots exploring his favourite genre, covering a range of fictions from horror to sci-fi, fantasy and romance.