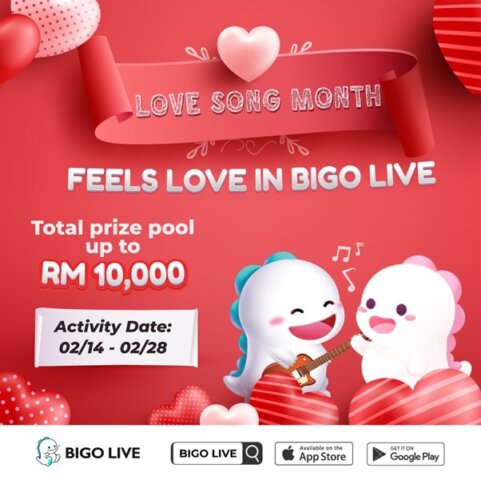 Bigo Live Official Hosts will perform their renditions of notable love songs and ballads, where they will compete to put up the best performance.

In celebration of Valentine’s Day, Bigo Live, the global livestreaming platform, is proud to announce its February Love Song Month singing competition. Held from 14th to 28th February, Bigo Live’s official hosts will be coming together to entertain viewers as they perform notable love songs and ballads. The hosts will participate in a knock-out style (PK) competition where the top 30 will stand a chance to win a prize pool of up to RM10,000 worth of BIGO Beans, Bigo Live’s virtual currency.

The competition will be held in two rounds, with the first round taking place from 14th to 21st February. During this round, viewers are encouraged to show their support by voting for their favourite hosts via the voting box on the respective host’s channel during their performances. The second round will see the top 30 hosts battle it out from 21st to 28th February.