Myanmar shares a border with China to the north and northeast. It borders Laos and Thailand to the east and southeast respectively, the Andaman Sea to the south, and the Bay of Bengal, Bangladesh and India to the west.

Myanmar shares a border with China to the north and northeast. It borders Laos and Thailand to the east and southeast respectively, the Andaman Sea to the south, and the Bay of Bengal, Bangladesh and India to the west.

Official Name
Republic of the Union of Myanmar 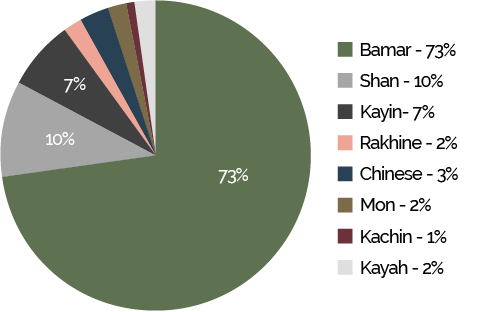 The flag of Myanmar has 3 horizontal stripes of yellow, green and red with a 5-pointed white star in the middle. The 3 colours of the stripes are meant to symbolise solidarity, peace and tranquility, and courage and decisiveness respectively. End of Third Anglo-British war and establishment of Myanmar as a province of British India.

Independence from the British.

Opposition National League for Democracy (NLD) wins landslide victory in elections but the results are ignored by the military.

Military junta conducts an election, boycotted by the NLD. Hands over power to a nominal civilian government.

As Myanmar moves out of the COVID-19 pandemic, its weakened economy experienced a -18.4% GDP growth rate in 2021, with the Asian Development Bank forecasting Myanmar’s GDP growth rate at -0.3% for 2022. Economic growth has been affected by the pandemic, as well as the ongoing political instability and disruption of critical services.

Industrial
The industrial sector accounts for 28% of the country’s GDP, with the major industries being agricultural processing, manufacturing, construction and automotive.

Energy
While Myanmar’s oil and gas industry is a significant player, the country is also expanding the development of renewable energy such as hydropower, which is the main source for electricity generation in Myanmar. The government also issued the National Energy Policy in 2014, which aims to electrify all households by 2030 and increase its electricity generation capacity.

Financial Services: While Myanmar’s financial system remains one of the least developed, the government is prioritising reform plans. The advancement of fintech has a potential to boost the financial sector, while local banks are expanding their networks, products and clientele. A gilded stupa located in Yangon. The Shwedagon is the most sacred Buddhist pagoda in Myanmar.

The Buddhist temple houses four standing Buddhas, each one facing the cardinal direction of East, North, West and South. Said to be an architectural wonder in a fusion of Mon and adopted Indian style of architecture. Mohinga
A rice noodle and fish soup that is a favoured breakfast dish. It is considered by many to be the national dish of Myanmar.

Shan-style Rice
Known as fish rice, it is a typical Myanmar food. It combines rice cooked with turmeric and topped with flakes of freshwater fish and garlic oil.

Maha Thingyan
Also called the Water Festival, Maha Thingyan celebrates the descent of Thagyamin, a celestial Buddhist figure, to earth. The week-long celebration takes place around mid-April and is marked by the dousing of water at one another for cleansing.

Thadingyut
Known as the Festival of Lights, it falls on the full moon of the seventh month of the Burmese calendar and signals the end of the Buddhist Lent. Devotees celebrate by lighting oil lamps, candles and incense at pagodas, and decorating their houses and gardens with colourful paper lanterns. Food offerings are also given to monks and the poor.