NYC  hosted a series of three conversations in support of this national effort.

Attended by: Ms Sun Xueling, Minister of State in the Ministry for Education and Ministry for Social and Family Development

The first session, which focused on issues in the school environment, was held on 21 December 2020. Here are some key takeaways from the session: Participants mostly acknowledged there had been progress in efforts to promote and strengthen women’s development in Singapore. However, they saw room for improvement, particularly in areas such as changing mindsets on traditional gender stereotypes and perceptions on women, closing gaps in the legal system, victim-blaming and creating a stronger culture of consent and reducing stigma and discrimination in specific industries due to gender. Participants discussed the important role that education and family play in engendering positive mindsets about women’s development and the need to include both genders in gender discourse.

The top three areas of importance in supporting women’s development as voted by participants were: Culture of Respect for All, Safe Environment in Schools, Home and Work, and Equitable Roles at Home and Society. 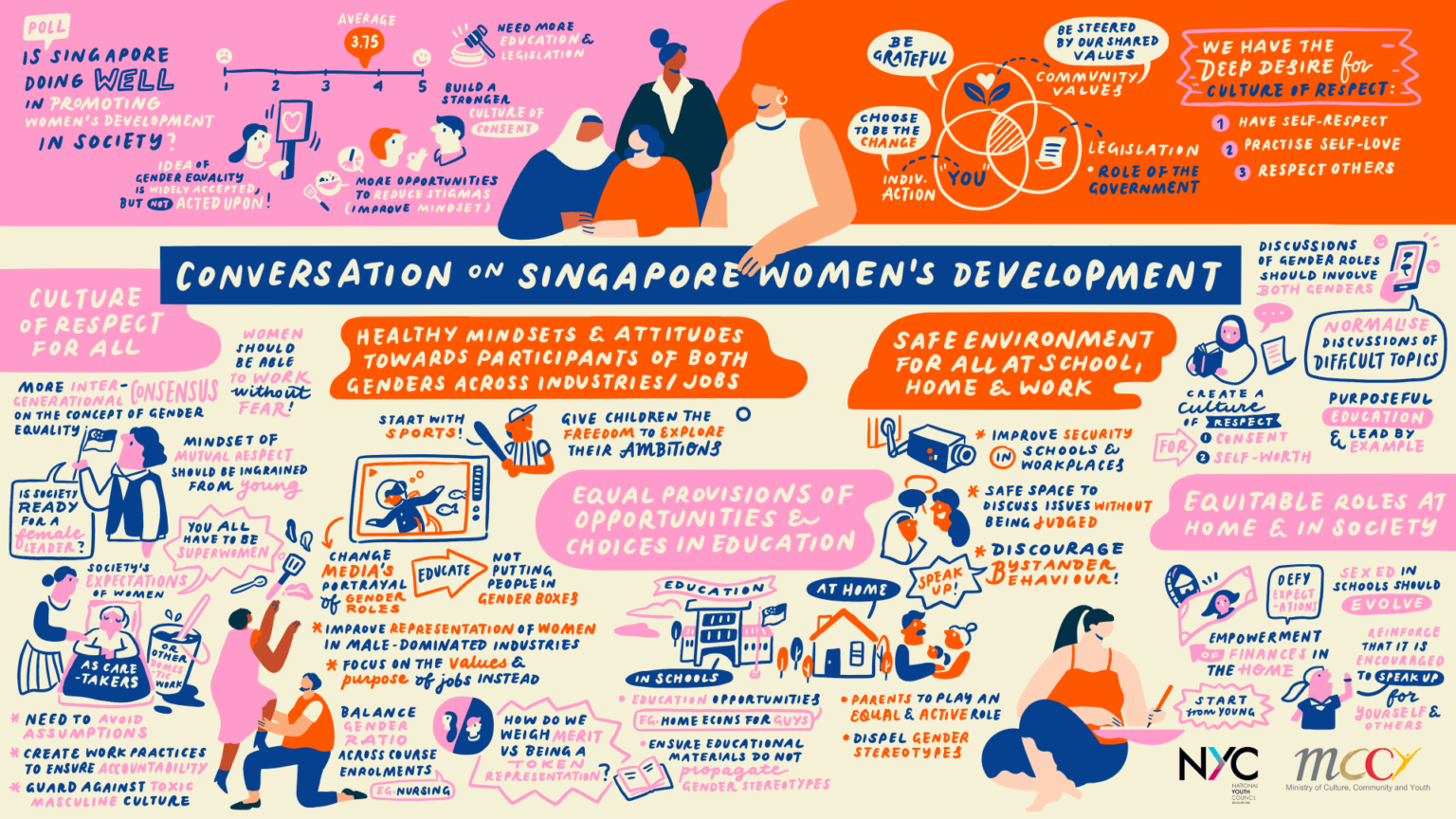 Culture of Respect for All

The majority of participants felt that cultivating a culture of respect for all was key to supporting women’s development. The general sentiment was that though there have been improvements in gender equality compared to the past, discrimination against women stemming from traditional gender roles and stereotypes remained prevalent. Participants shared that the common stereotype of a woman’s role as a caregiver bounded them to childcare duties unfairly. Women were also expected to be “superwomen”, and be able to juggle their career and their role as caregivers at home effectively.

Participants shared that gender beliefs and stereotypes were shaped based on what children were taught and exposed to during their formative years. Hence, families have a crucial role in starting these conversations and cultivating healthy mindsets towards gender equality.

Participants also shared that education was crucial in changing mindsets, and schools played an important role in shaping the mindsets and behaviours of the younger generation. Participants suggested that educational materials such as textbooks should convey messages of gender equality and include a more diverse portrayal of both genders in the professional setting.

Some noted that the portrayal of gender roles in media could also affect gender perception in society, especially in one that consumes media so heavily. As such, participants suggested that we should strive for a more diverse and balanced portrayal of both genders in mass media to avoid reinforcing traditional stereotypes. They also shared that the media continually objectifies women overtly and the general public had come to view that as a norm.

Participants shared that more needed to be done to create a safe environment for both genders in society. Some noted that while some universities have started conducting workshops on respect and consent for their students, many felt such courses would have been more impactful if taught at an earlier age because values are more entrenched and difficult to change in adults. Such lessons should also not be a one-off event and rather a continued effort to reinforce these values further. Some suggested that it might be better to include these topics while discussing sexuality education in schools rather than emphasising abstinence.

Participants felt that there should also be more open discussions in classes and schools involving both genders so men can get some perspective and learn more about women’s struggles. Some even suggested teaching youth about the legal repercussions of behaviours such as voyeurism and sexual harassment to dissuade such actions.

Participants also raised the importance of educating students on approaching friends in need and empowering them to get help if needed. They shared the need to raise awareness and make sure that there are enough safe spaces for people to ask questions and learn more about gender issues, without the fear of being judged.

Equitable Roles at Home and Society

Many participants raised the point that women were unfairly expected to perform specific roles, such as caregiving. As such, certain industries like nursing tend to be dominated by women, while engineering and computing were male-dominated.

While most agreed that schools played an important role in creating learning opportunities for children, some shared that it was also important that children should be able to see both parents being equally involved in their upbringing.

Participants felt that there should be an equal division in caregiving and housework between both parents and domestic duties should not just be seen as the woman’s role.

Check out our findings from a pre-dialogue survey with youths....

Youths shared their thoughts on including diverse voices for women's develop...